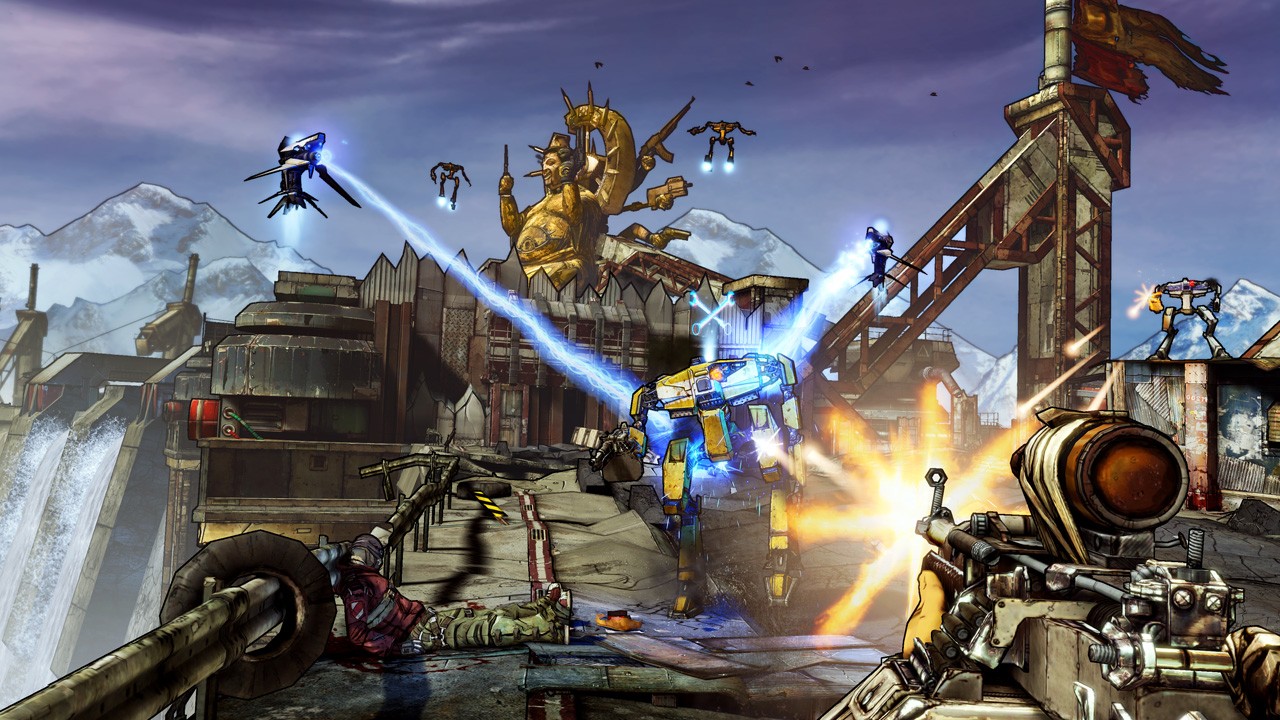 This humor-filled, action-adventure game from Gearbox Software combines the best elements of role playing games, like character building, experience points, and rewards from building up skill trees, with a first-person shooter perspective.

Characteristic gameplay features that hearken back to its predecessor, Borderlands, like collaborative online play and randomly generated loot are present here also.

Players take on the roles of 4 treasure seekers called “Vault Hunters” who quest across the planet Pandora. Pandora is ruled by Handsome Jack from his H-shaped satellite that constantly floats in front of Pandora’s moon and is visible to the mutants below on the surface.

The action in this game is break-neck paced and there’s a large selection of weapons to choose from. Each weapon in the game comes with specific features which are related to what in-game manufacturer created it. A weapon made by the Tediore company for instance can be thrown at attackers, explode, than phase-shift back into thrower’s hands, fully reloaded.

Characters also have their own personal, signature hand-to-hand combat style or melee attack. This can be enhanced by gaining experience and spending the points earned in the skill tree related to the character’s class.

The World of Pandora

Long ago aliens with superior technological skills left behind a secret, hidden location on the planet Pandora called the Vault. Lurking within the Vault was a powerful monster dubbed “The Destroyer”. When it was exterminated by a group of brave treasure hunters, the monster’s hideous death triggered the fiery eruption of a strange, new element called “Eridium” from Pandora’s core. A man named Handsome Jack was able to use this powerful resource to instate a barely-stable social order to reign over the planet. But rumors rise of another, larger Vault somewhere on the planet and new treasure hunters a drawn in.

Lured by Handsome Jack into a trap the new “Vault Hunters” are train wrecked in a frozen waste on Pandora’s surface. A mysterious spiritual force called The Guardian Angel contacts the Vault Hunters and guides them towards a city called Sanctuary where they join a rebellion against Handsome Jack known as the Crimson Raiders. Together they must recover the key to the vault.

Salvador the “Gun-serker” excels in dual-wielding gun combinations. He can fly into a rage that allows him to regenerate health quickly while throwing multiple grenades. His double middle finger flip off entices enemies to battle.

Maya the Siren specializes in damage over time. The she shoots elemental types of damage such as electricity, fire, acid, explosives, and slag. As a Siren she has a special ability to paralyze enemies, and temporarily convert them to her side, known as Phaselocking.

Axton the Commando has a gun turret that mows down targets like grass before a scythe. Experience points can be spent to upgrade it so that multi-gun barrels are attached. Further up the skill tree is an ability that creates a double turret and allows it to detach and stick to walls.

Zer0 the Assassin can create a phantom double of himself for a moment to deceive enemies. Using this ability also gives him the chance to use a critical hit. He specials in sniper attacks from a distance and melee attacks at close range.

Gaige the Mechromancer can call upon the “Deathtrap” machine, made of junkyard leftovers to fight for her.

Krieg the Psycho attacks with a vibrating axe that regenerates his life after he kills. He risks utter destruction to score massive amounts of damage.