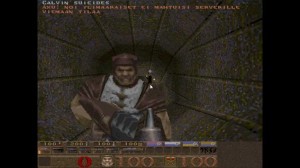 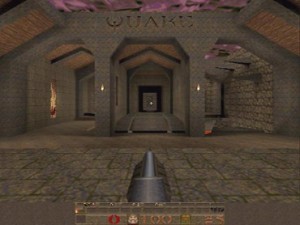 Pickup the Thunderbolt, and the rockets, own the map.

Quake is the literal and spiritual successor to the doom series, and is known  for being the real first true 3D first person shooter that was available to mass markets. Originaly intended to be much more of a innovative game then it already was, production was rushed to the extreme where literally the developers got to the point of saying “Lets just slap some doom weapons in there”. Effectively they did just this, as quake’s gameplay is quite like doom’s, just in a very much more 3-Dimensional perspective. It acts as a psuedo doom sequal, but is good in it’s own right. Id software, while having little to no faith in anything else besides the graphics engine, Somehow made themselves a golden egg. The game, had great enviroments, breathtaking compared to anything else at the time that found itself running in real-time. There was just enough innovation in the weapons, and enemies to keep players at home enough to not be turned off by the game, but keep them curious, interested and immersed.  Oh, and that call of duty your playing right now would be nonexistant if this game did not set the precident for which all networked multiplayer games followed. A consistant and lag-free experniance on a lan, and even a true modern netcode when the Point release patch aptly named QuakeWorld came around.

THIS GAME.. THIS FRIGGIN GAME. If you ask your older PC playing buddies, “what were the glory days like” most of them will tell you of quake. The hours spent on quake, the competition, the level of skill, everything about quake was so amazing, the fact that the game was the first of its kind, and yet still manages to be one of the best, even in it’s own series that constantly improve continuously amazes us. We came into the game real late, watching demos of some of the best players dueling. The only thoughts that we had, were, “We came into this game too late, we were born too late, we need to make a time machine and go back, and play this game when it was bigger.” Nowdays the community is still thriving, which is surprising but it is no where near what it used to be.