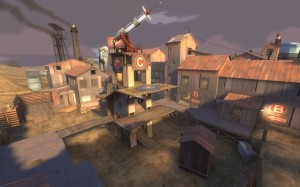 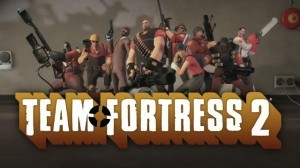 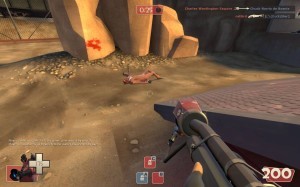 Why we installed Team Fortress 2

Team Fortress 2 is currently one of the most popular games on steam, always holding top 5 most played on steam. We think it is a particularly good choice as you are able to make use of the LAN features here at GameSync. As the game is very much team oriented, playing together at GameSync allows you to a communicate and coordinate on a level far above your home setup.

Team fortress 2 is now deeply rooted in internet pop culture, almost to the point of you cant really go around the internet without seeing something related to the game or the characters. Its worth mentioning that the game even has had promotions with adult swim, getting valve air-time for their game, and in return providing interesting adult swim themed items that are available in the in-game shop.

At first look it is easy to see that Team Fortress 2 was very heavily inspired by animations such as “The Incredibles”, as well as other 60’s art. This makes for one of the most interesting looking first person shooters, and games of all time. It pulls of this art style quite effectively, without diminishing any of the other aspects of what you would expect from a mature first person shooter game. Gore still looks like gore, and blood still looks like blood, but the art style allows you to perhaps be grossed out a little less when your friends and foe alike explode into giblits.

Team fortress 2 is a sequel to Quakeworld Team Fortress, and Team Fortress classic, which are effectively the same game, with a few modifications in slightly different engines. Team fortress 2 does away with the traditional strafe jumping, how fast can you go part of the Team fortress gameplay, and really reinforces the divisions in the classes, and working together as a team to complete objectives. 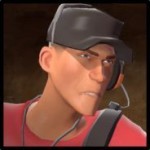 A young Boston man, with an attitude to fit.

The scout is the fastest class in tf2, has a double jump and Captures at twice the rate of other classes. Undoubtedly the most agile class in the game, the scout is able to slip in and out of enemy lines unscaved due to his swiftness, though if he does get caught he is in deep trouble as he has very low health compared to most of the other combat classes. 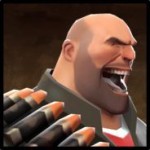 A rather burly Russian man with an affinity to large guns.

“Some people think they can outsmart me. Maybe, *sniff* maybe. I have yet to meet one that can outsmart bullets.”-Heavy in “Meet the Heavy”

The Heavy is the slowest class in tf2, but has the most raw firepower. The Heavy’s Mini-gun tears up entire teams in seconds at close range, and chips people down a few pegs at a distance. The heavy also features high amounts of health, and a standard shotgun, as well as his bear fists, acting as a melee weapon. The only real downside to to the heavy is his speed, and maneuverability, making it hard for him, to get out of bad situations fast enough to survive. 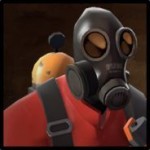 A mentally deranged person in a firefighting outfit. Thinks he is spreading joy to the world.

The pyro is a somewhat interesting combat class as he is able to set other players on fire, and put them out as well. The pyro’s health is medium allowing him to take a bit of a beating, but he is a somewhat large character making him an easy target. The pyro is a great counter against projectiles as he is able to reflect them back and deal additional damage on the return trip. He also features a shotgun to finish off his burning opponents.

A mysterious French master of espionage 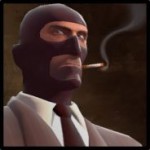 “Right behind you” -Spy

The spy has the same amount of health as a scout, and has no extra maneuvers he can perform. Instead of focusing on straight up combat the spy finds himself cloaking, and disusing himself as the enemy, waiting for the perfect moment to stab an enemy in the back with his butterfly knife. He is also able to wreak havoc on the engineers buildings with his electrosapper. When things get dicey and his cover is blown he is also able to pull out a revolver, but often a spy dies as soon as he is caught. 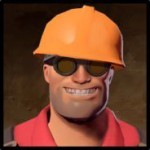 A rather crafty Texan man who’s great at building things.

“Hey look, buddy. I’m an engineer — that means I solve problems.
Not problems like ‘What is beauty?’ because that would fall within the purview of your conundrums of philosophy.
I solve practical problems.“- Engineer in “Meet the Engineer”

Suffering the same health predicament as the scout, but with none of the benefits, the Engineer finds himself best suited to hiding behind his mechanical creations. His mechanical creations include, a powerful sentry, a Teleporter that can move troops to the front lines momentarily, and a dispenser that dishes out ammo, and can replace a medic’s healing in a pinch. 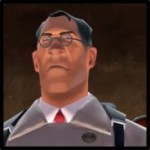 The Medic features a moderately low, but regenerating health, and a faster speed then most classes. The medics job is to keep people alive on the battlefield, and activate ubercharges, or kritzkrieg charges to enable the team to push, hold or take out targets more effectively. Because the medic lacks any real raw firepower, he heavily relys on his teammates to take care of the enemy.

A loud drunken, obnoxious Scottish man who deals in all things that go boom. 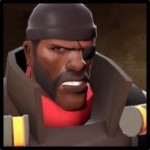 “If I were a bad Demoman, I wouldn’t be sitting here, discussing it with you, now would I?” – Demoman in “Meet the Demoman”

The Demoman features a medium amount of health, and somewhat agile movement. He excels at spamming from afar, and dealing excessive amounts of damage at mid range, but often has trouble dealing with closer targets. He is also able to preform a sticky jump by laying a sticky grenade on the ground and detonating while jumping over it, allowing easily traverse long distances, and get up to higher positions. 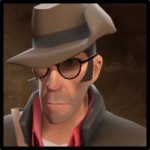 A calm, “professional” Australian man who prefers to take out targets from afar.

Snipin’s a good job, mate! It’s challengin’ work, outta doors. I guarantee you’ll not go hungry, cause at the end of the day, long as there’s two people left on the planet, someone is gonna want someone dead.” -Sniper  in “Meet the Sniper”

The sniper features the same health predicament as the scout, but without most of the movement benefits leaving himself as an easy target if caught off guard. The sniper is really only good for taking out specific targets at advantageous times. Otherwise snipers often just find themselves being more fodder for the cannons. 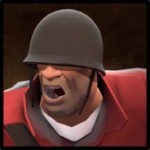 An insane American Soldier with a rough attitude, and a particular hatred towards Scotsmen.

“If fighting is sure to result in victory, then you must fight!” -Soldier in “Meet the Soldier”

The soldier features a medium amount of health, and a somewhat slow movement speed, this is of course made up for with his unique ability to propel himself in any direction with rockets, this is called rocketjumping. The soldier is able to dish out considerable amount of damage with rockets, and can easily finish kills with his shotgun. The soldier is one tough guy to mess with unless you can get a considerable advantage on him. 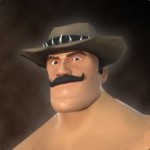 Basically the Chuck Norris of the TF2 World

“I’ll beat them to death with my bare hands!”- Saxton Hale on Hippies

The president and CEO of MANN CO. a major player in the comic series, and the major supplier of arms and assorted items to the team fortress gang. 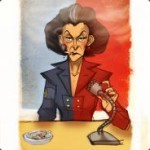 “Stalemate Your all loosers”

Announces all of the important events in the game, such as winning a round, capturing a point, adding time. Most games wouldn’t even really consider their announcer as a character, let alone name them Helen. In cannon she handles all of the fairs of the RED and BLU teams, and is even responsible for certain rivalries. 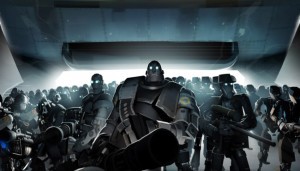 The villains of the Mann VS. Machine game mode. They are all  robots resembling each of the 9 character classes in the game. They each have giant versions as well. There is also a robot that appears to be a sticky bomb with legs, and as such it goes boom. 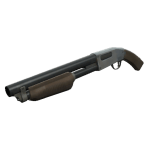 The go to weapon of tf2, and the Team Fortress series in general.

Is able to be wielded by

The scout’s own personal version of the shotgun. Has increased maximum damage and is able to take out most targets in two shots at point blank. 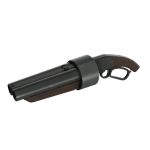 The sniper rifle is the sniper’s pinpoint accurate tool of death. It allows the sniper to aim for a quick headshot to get extra damage, or charge shots to unleash massive locational damage. 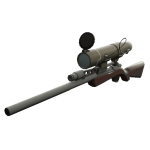 The soldiers primary weapon, it features easily directed splash damage, and enables the soldier to rocketjump.

A sidegrade of the Rocket Launcher, allows the soldier to shoot faster rockets, and deal additional damage for direct hits, but at the cost of splash damage. 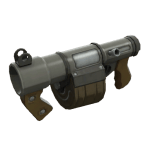 The Demoman’s primary projectile launcher dispenses heavy damage in the form of sticky bombs that adhere to surfaces. The sticky bombs have to be detonated to deal damage, and up to 8 can be laid out at once. 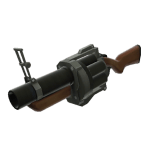 The Demoman’s secondary launcher does as the title would allude to, it launches grenades. These grenades must either make direct contact with a target, or lay on the ground for a certain amount of time to detonate, and deal damage. 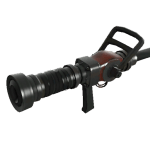 The medic’s medigun despennces heals over time to a single target, and is even able to buff the target player beyond their normal health. The medigun has a slow constant heal rate, but when a target has not taken damage for a long time, it heals them very quicky. This is known as crit heals.

The spy’s revolver excelles at finishing up a bit of damage on very hurt targets, but doesn’t really hold it’s own in a fight. It features a decent

The heavy’s giant gun of death. Has a spin up time before it can begin firing, but has a high rate of fire, and insane damage, especially up close.

A variation of the minigun. Deals less damage but slows down targets.

The pyro’s primary weapon enables him to set targets on fire and incur a damage over time effect. It does not do very much damage unless the target is being flamed consistantly. The secondary fire airblasts projectiles, and buffs the damage on them, allowing you to send the soldier his rockets back with interest.

Never before has a game been so fun for everyone, and been so competitive.  The average player of the game prides themselves in getting awesome new hats, weapons, accessories, as they hop on their favorite public server and plays with all of their buddies, on servers with gigantic player limits, and all around insanity. This is the complete opposite of what the competitive player does. A competitive player plays with mostly default weapons with, as few gimmicks as possible, and either partakes in 6v6 (Standard), or 9v9 (Highlander) gameplay. The large contrast between the game that the normal players play, and the competitive ruleset, prevents new blood from coming into competitive, by throwing out all the natural leadups into competitive, the competitive community has to look at other ways to promote itself, and while it sometimes works out, it keeps the community dead small, which is not always a good thing.