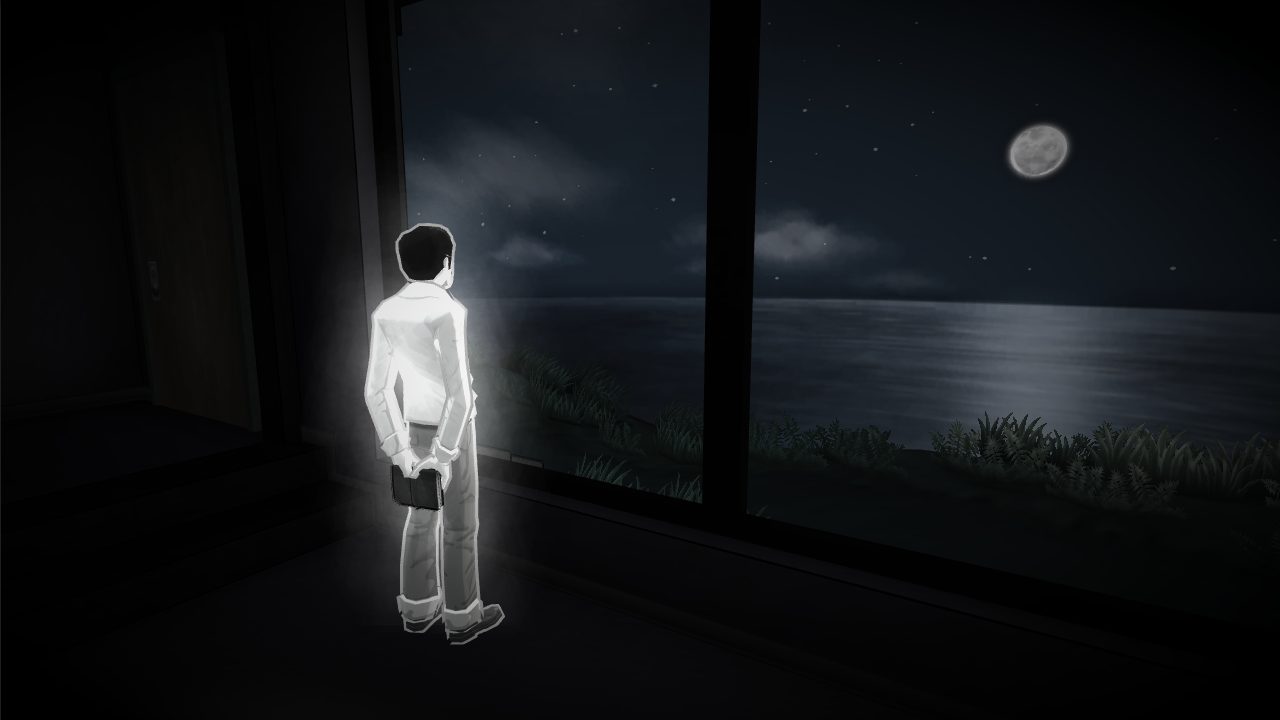 Available on both Windows and Mac platforms, the Novelist presents a thoughtful, contemplative, and realistic approach to gameplay. It was designed and developed by Kent Hudson.

As a silently sentient phantom presence you haunt a 1970’s family vacation home in a coastal woodland area. During daylight hours you must avoid being seen by members of the family, who will freak out if they do see you. To disappear from sight you can enter into objects like light fixtures. Once night falls, however,  you can freely roam the house at will, searching for clues in the form of journal entries and character thoughts to piece together a story.

You have two choices of how to play the game: Either as a visible ghost or an invisible one. Choosing to be visible adds the extra challenge of sneaking, hiding, and using stealth tactics to get around and not be seen. Members of the family are always wandering around the house and will often turn around unpredictably, creating suspense. If you opt to play in invisible mode you can run through the game without worrying about being seen and just collect as many journal entries, thoughts, and other clues as you can to push the story forward.

In place of violence and combative situations, The Novelist uniquely presents players with the strange challenge of spiritually possessing the family members. In doing so you can discover the secrets, hidden memories and intentions of the person you possess. This allows you to make important decisions for the development of the story arc, which has many outcomes.

The characters you haunt are a family of three on vacation in the 1970’s. Dan, the father, is a novelist who is struggling with writing his next book. His wife, Linda is a painter who shows her art at the local gallery. Tommy, their young son is a typical kid, although hints are dropped as the story develops that he may have a learning disability.

Your main goal in this game is to guide the lives of each of three family members so that they take actions that will keep themselves and the other two happy. For example, Dan the father is a novelist working on a book and his creative life clashes with the needs of his wife and child. As the ghost haunting this family, by following the clues you gain from reading journal entries and the thoughts you recover from possessions, you guide the story so that Dan has time for his book, says the right things to his wife, and gives attention to his son.

To influence the story, after gathering enough clues to make a decision as to how you want to see the family life develop, you must approach the father Dan at night and whisper what you want him to do in his ear. If you are successful he will wake up the next day and perform the action you suggested and from there you can see how your decision develops the story.

Despite the whole ghost angle the interesting thing about this game is how real it becomes. By being the hidden, fourth member of the family you become involved as a player in each character’s desires and conflicts. You become attached to each member and are disappointed when a decision you make ends up upsetting someone or leads to a negative situation. This is quite an unusual approach to gaming which most often aims to take players out of the real world. The Novelist puts you right into real life family drama.