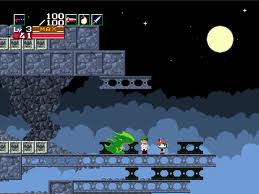 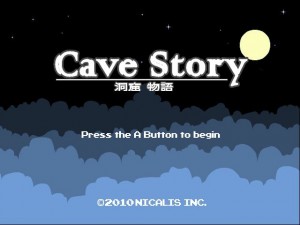 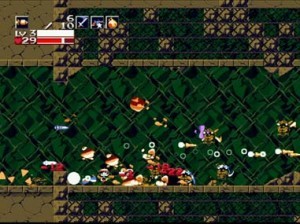 Robots, and bunnies oh my

Cave Story is a 2D Action/Adventure game in the vein of Super Metroid,  and the Castlevania Series with a retro style to fit.

The story revolves around an android named quote who has lost his memory, and suddenly finds himself, on a strange island with frightening monsters, and quirky characters. He soon finds himself trying to solve the mysteries of the island, and to stop the evil Doctor, and his minions.

Wow, we are not sure how to even explain how good this game is. Originally we thought this game was a joke, we had only heard the testimonials of rabid fans, that were poorly explained, and seen a few screenshots that did not look like anything promising. Later we happened upon getting the game in one of the humble bundles that we purchased with the intent of getting a inexpensive copy of super meat boy, and figured that we would try the + Version of the game. We could have not been more impressed, the graphics actually seemed to have some sort of an art direction now, the already great compositions from the original game were brought to life with  several new arrangements of the games soundtrack. The game has a seemingly simple yet, deep feeling plots, and game play to really back it up. If you seriously have not played this game, we recommend playing the game.

Are you still reading? Seriously? Why aren’t you playing this game right now? You dont have time? You have a job? There’s a save feature you know.