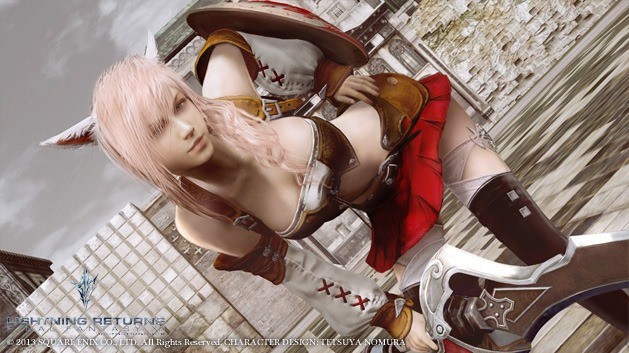 So with the Lightning Returns: Final Fantasy XIII comes the option to dress Lightning in a variety of costumes, which I admit is really cool. The game will allow players to customize Lightning as they wish, whether it be her actual look, her weapons, or her battle style. But recently Square Enix released a picture of Lightning in a brand new outfit, and it’s a bit odd.

Above is a picture of Lightning in a Miqo’te costume. Now, when Lightning made her first appearance in Final Fantasy XIII, she wasn’t wearing cat ears. She was this strong, tough woman who was determined to save her younger sister. Lightning’s journey forces her to trust other people (something she has trouble with). Her character is known for being smart, independent, and serious.

This new costume doesn’t suit her. It doesn’t match up with her character – even the pose itself doesn’t feel like Lightning. The image at the top puts her in a suggestive pose, which definitely isn’t Lightning. It looks like they’re trying to make her ‘cute’, and it’s not working. Lightning is very mature and this just costume just feels wrong.

So I’m not really sure what’s happening with this new game, but I’m already a bit wary. But who knows, maybe the game will surprise me. And from what I know already, this costume is just one of the many options. So even if you’re not a fan of this version of Lightning, there’s sure to be other outfits that suit her better.

P.S. Does this remind anyone of Lara Croft, where you unlocked outfits throughout the day? Some of them were pretty impractical and just there for fan service, kind of like how this costume is.